Illyama 4K screen for Developer, Use Of

I have developed with two or three screens connected to my PC (or laptop – using Matrox’s excellent Dual Head 2 Go) for many years. Like desk space, my view is you cannot have enough screen space to help keep organised and productive.

Recently I took the plunge and purchased a 4K screen from Amazon. Some motherboards have HDMI outputs, which support 4K, but my main PC has not, and as I use multiple screens in any case, I purchased a NVS510 quad port 4K card that can run 4 x 4K screens if necessary. At the moment it is running 3 screens: my 4K screen and two 1920 x 1200 screens on Windows 7.

I chose the screen based on the reputation of the manufacturer and the fact that this screen has many different ports on it, so I can use HDMI to plug my Macbook in, and even split screen between two inputs (doubt I’ll use this I prefer more not less screen space).

The results are amazing the 4K screen is exactly 4 times the screen area of 1920 x 1080 screens, so I could have stopped being greedy and replaced my 3 screens with the one 4K screen and almost gained an additional screen to boot. But its good having one 1920 x 1200 at least because I can get the main Visual Studio window I’m working on up on that screen and really focus on the code in that window.

What I did find was that with Windows 7 the text on the 4k screen was a little on the small side if I didn’t want it to be too big on the 1920 x 1200’s. Windows 8 is better in this respect because it allows you to set your text size individually on each monitor. 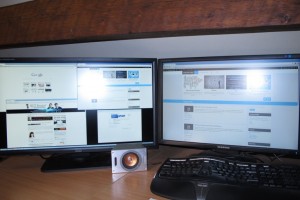 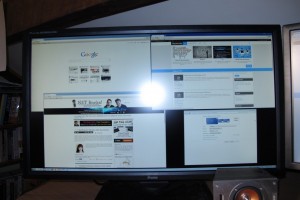 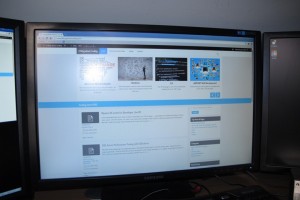 The images above show a comparison. This blog is shown maximised on the Samsung, with the same size window on the 4K screen alongside. 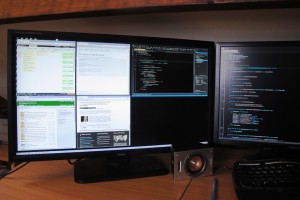 An old, but useful podcast on developer hardware and screen space (multiple screens) can be found at Hanselminutes #74.

N.B. When considering the DualHead2Go, please check your display output on your PC, you may prefer a display port version of this product.

Watch Now: How to Stop People Problems from Hurting Your Estimates
- mike@mountaingoatsoftware.com

This is the final video in a short training series about story points. Available for a limited time

Watch Now: What to Do When Teams and Stakeholders Want Perfect Estimates
- mike@mountaingoatsoftware.com

Now available: The second video in a series to help you coach your team on story points

More than 5,900 agile professionals took this training! I’m making it available for free until April

Should a Team Assign Work During Sprint Planning?
- mike@mountaingoatsoftware.com

Some teams assign all tasks upfront. Others don’t. Here’s what works best.

Top 5 changes in the 2020 version of the Scrum Guide
- mike@mountaingoatsoftware.com

Recently the 2020 version of the Scrum Guide was released. What changes were made that you need to b

I'm having a blast customizing my terminal and making my prompt awesome. How to make a pretty p

How to make Command Prompt, PowerShell, or any Shell launch from the Start Menu directly into Windows Terminal
- Scott Hanselman

I love the Windows Terminal, but right now I launch the Terminal, then I pick a Shell (PowerShell, C

Muscle memory is a heck of a thing. When I want to build code I type Ctrl-Shift-B. I can't not.