Following up on my post about setting up Wireless networking, I wanted to relate a recent problem I have had.

On occasion, the wireless networking was a bit hit and miss. In particular, the two iPads I have didn’t want to connect. Resetting the router was the only way to resolve.

The router in question is a Draytek 2830vn. I loaded up wireless settings and set the mode to 11n only. This appears to have done the trick. 11n is the latest wireless networking standard of the options listed. 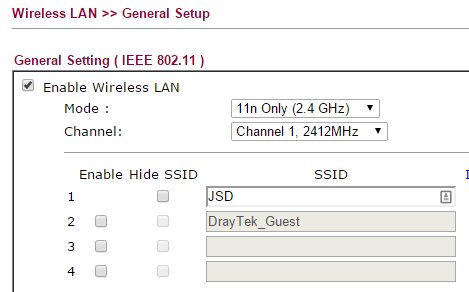 Screenshot of the 11n only setting

[VIDEO] What does a virtual certified scrum course look like?
- mike@mountaingoatsoftware.com

Boring retrospectives or ones in which people are afraid to speak the truth are just two of the most [...]

If you really want to speed up your team, sign up now for Scrum Prime and have everything delivered [...]

During the Microsoft Build keynote last week - that you can watch free online here - we snuck in a L [...]

I've been spending a lot of time with Docker lately. Docker Desktop on Windows is great and get [...]

Review of the Surface Book 3 for Developers
- Scott Hanselman

Last year Microsoft rebooted PowerToys and it's open source and on GitHub. It's a few mont [...]

Microsoft Build 2020 registration is not only open, it's FREE, it's LIVE, it's VIRTUAL, and it is all FOR YOU
- Scott Hanselman

Microsoft Build 2020 is upon us, registration is open NOW. Stop reading this blog post and go regist [...]