As I explained back in January when I purchased my first 4k screen and blogged about it then with 4k Screen, Developer for the User Of, a developer cannot have enough screen space and also real desk space to work with.

I have retained a 1920 x 1200 screen in order to focus on one (Visual Studio or SSMS) window, but the other screen serves as desk space rather than having everything minimized and more difficult to get at.

Since moving house last week I have wired up my two dev PC’s in such a way that the 4K screens can be used by either PC (they typically have multiple inputs and can either do split screen or full screen on one of the inputs). 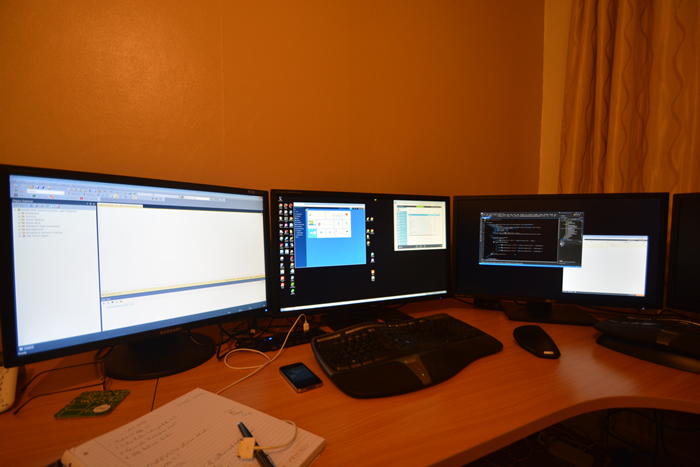 How Should Agile Teams Deal with Leaders Who Won’t Listen?
- mike@mountaingoatsoftware.com

Today, Certified Scrum Trainer Scott Dunn shares his insights about the pain felt when leadership do

After making one decision, it can be helpful to make the next decision or two at the same time.

Can a Team Vote Someone Off the Team?
- mike@mountaingoatsoftware.com

We say agile teams are self-organizing. Does that mean they have the right to vote someone off?

This is an interesting blog post on How to SSH into WSL2 on Windows 10 from an external machine. Rea

Cool blog post eh? Good title, right? DO NOT DO THE INSTRUCTIONS IN THIS POST until you have read th

How do I find which directory my .NET Core console application was started in or is running from?
- Scott Hanselman

I got a great question emailed to me today. And while I could find the answer and email them back, I

We're all remote and it's sad, but I've found some new joy of late in rebooting my li