On Nov 1, 2015, I tried to upgrade my laptop to Windows 10. This was a bad experience, when it had upgraded I didn’t have a start menu or an App Store, so I reverted back. See this link to the original article about my Windows 10 upgrade experience.

I wasn’t very happy at the end of it, and had my usual rant about about Microsoft and software in general, in that you should have confidence in your own software design, screen layouts and ubiquitous language, and certainly not focus on your competitors to the detriment of your own product. Apart from this ongoing gripe with Microsoft, they have come a long day since the days of .NET 1.1 and datasets, and I like their products, Windows 10 apart, a lot. Maybe the Gu should take control of Windows10 and bang a few heads together who knows?

Anyway I felt it was important to give it another try, for two main reasons:

So I decided to give it another try. I got the same laptop, which hasn’t really been used since then, ran Windows Update and tried again. This time around I did the same things, but it took a lot longer to upgrade (was it because I had installed SQL/Server 2014 and Visual Studio 2015 on it… maybe…).

But importantly this time around it was smooth. Everything worked as expected and apart from a few settings which I feel are good for developers, its all working fine without problems of any sort.

Using the Windows key and then tab, or Windows and CTRL and left or right arrow, or Windows and D – all are used for different things on the multi screen features of Windows 10.

A nice bonus that I didn’t know about in advance was that you can now use two fingers on the mouse to scroll, although not as smooth as on my Macbook Air, it works (so Windows can now do multi-touch – I assumed that was something that Steve Jobs had patented early on in his second stint at Apple – interesting).

I’m not really a Windows geek, my head is too full of developer thinking and C# to worry too much about the operating system, I would have been happy with Windows 7 with multi screen, but so far so good anyway.

What I have Done Since the Upgrade

This is what I have done to the installation since the upgrade: 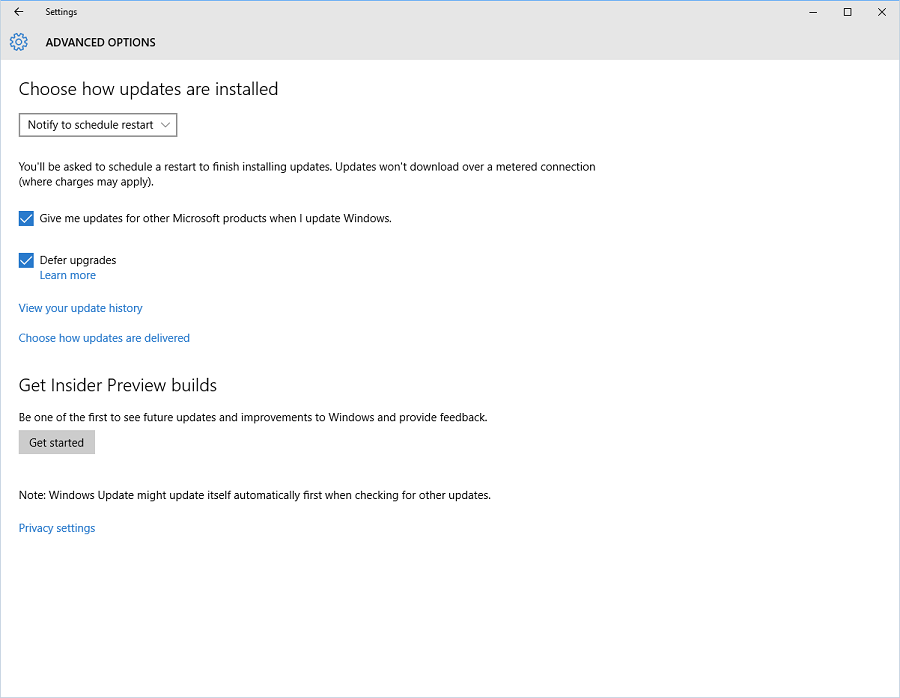 Turn on behaviour monitoring Disabled  (Hello? I’m a developer, I know more about you than you will ever know about me you stupid machine! What do you think you going to learn by looking at my source code and executables, slowing me down and making my life miserable?)

Monitor file and program activity on your computer. Disabled. I’ll do that myself thanks.

The Microsoft Windows Team needs to add a big developer button to Windows 10 that dumbs down all this consumer crap and puts a Visual Studio 2015 icon on the desktop for devs. So maybe we should send the Gu round to the Windows 10 team to bang a few heads!

Anyway, on the whole, so far so good. I’ll blog again if there is anything further to add about Windows 10 when using it as developer with Visual Studio 2015.

My Most Popular Blog Posts from 2020
- mike@mountaingoatsoftware.com

I wrote 26 blog posts during 2020. In case you missed some of them, here are the most popular.

It can be very tempting to schedule a week without any meetings. But there are better ideas.

Doors are now open (for a limited time only) to my new course: Estimating with Story Points.

In this final video on creating estimates with story points, I help you overcome one of the biggest

Last year kind sucked, and the end of last year was particularly lame. I got off Twitter for a while

I think we can all agree 2020 sucked. Hopefully 2021 will be better. I've been a remote worker

The Stream Deck! (amazon link) is a lovely little device with bright LCD buttons that you can progra

Can you believe it's been 6 years since my last Tools list? Tools have changed, a lot are onlin